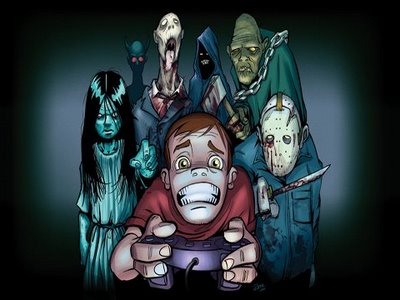 It has been almost twenty days after we celebrated Halloween and that's why we would like to show you our top 5 list of Horror games, which can really “scare you to death”. Since people are scared of different things like darkness, monsters, blood, ghosts, etc. our rankings won't be numbered. We let you order them the way you see fit. Feel free to share your ordering in the comments or add to the list.

So, here are the games, which terrify our team.

Kraven Manor – Kraven Manor is one of scariest games we have ever played. It is not what you see that scares you, but what you don't or think you see. Kravon Manor lets you explore an expansive manor and reveal the mysteries that lurk in the darkest corners. You can take advantage of a small scale model of the manor in order to dynamically alter the layout of your environment. According to lots of gamers around the world, this game is one of the best horror games of all times. However, we let you decide that.

Haunt – The game, initially named Haunt: The Real Slender Game, is a true adventure game with a large horror element in it. It is based on Victor Surge's “Slender-man” idea. The game relies on great sounds, which can really scare you to death. Haunt is a true horror game, that's for sure.

Phobia 1.5 – This indie horror game is a remake of the old Phobia 3: Fear of the Unknown. Just like in most scary movies, you take a wrong turn and get lost. In the next moment, you find yourself in an abandoned mansion looking for a shelter. You are about to discover what terrible has happened there decades ago. Afterward it might turn out that the mansion is actually not abandoned. Who knows?

Outlast: Whistleblower – This is the latest game of the popular survival-horror “entertaining”series. You play the role of independent journalist Miles Upshur, who breaks into a facility, re-opened by the "research and charity" branch of the transnational Murkoff Corporation. You will discover a terrifying connection between science and religion, nature and something else. The fact that the facility was a long-abandoned home for the mentally ill speaks for itself. The game is very scary, especially playing with all the lights off. The guys from IGN proved how scary it can be back in 2013. Check their video here.
https://www.youtube.com/watch?v=1Vcgdl4xQ18

Insanity – You are lost in the middle of nowhere, desperately searching for a shelter. After entering a weird building, you soon find out that you are caught in a trap inside an abandoned asylum. The tricky question here is whether you will manage to keep your sanity or not. Insanity is a very creepy game for sure.

If you think you are tough and nothing can scare you just turn the lights off and play one of these games. So you are not so tough, right boy?

Feel free to share what top 5 list you want to see and we will do it for you.