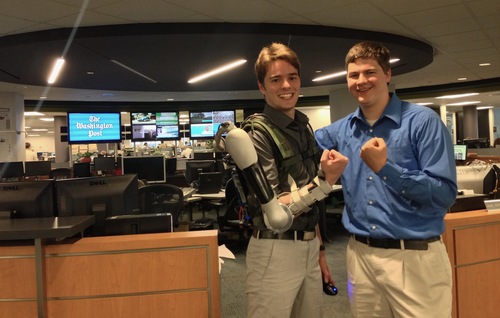 One of the dreams of the humanity is to achieve the technological advancements that will lead to the creation of exoskeleton that could augment the whole body. There are some developments in this field that may lead to the realization of that dream and the latest is a bionic bicep that will make the average human twice as strong. This bionic device was developed by four undergraduate students from the University of Pennsylvania and it is called Titan Arm. It can be easily strapped on the back and hand of everyone and only by itself it is capable of lifting 40 pounds. This means that every user of Titan Arm could easily double this weight with his own strength. The bionic device is a versatile one, because it is wireless and it can easily be strapped on anyone's back for a low cost.

The development team wants to make the device usable by that sustained injuries and can't use their arm to its full capacity or for physical rehabilitation. The other possibility for which they are working on is the device to be used by workers involved in jobs that require heavy lifting, which may help them to perform their duties much better and without the risk of injury. Obviously the bionic arm caught the attention of the science community, because it won USD 10,000 for its creators in the Cornell Cup for Innovations. It is also shortlisted for the nominations for 2013 Dyson award, which is in the field of engineering and its first reward is USD 48,500.

Titan Arm reminds to the film Elysium, where Matt Damon wears full bionic suit which makes him a lot stronger. The similarity is not something that should bother anyone, because actually the producers of the movie contacted the Titan Arm's development team for advices, and presumably inspiration. The concept of bionic exoskeleton is used in many other movies, with the oldest one dating from 1977. This film classic is called Exoman. Bionic exoskeletons are used in games too, like for example in Crysis or the expansion pack of XCOM: Enemy unknown – XCOM: Enemy within. Here we also have a representative of the classics, because the first character to use exoskeleton in games was the bounty hunter Samus Aran from Metronom, game that was developed in 1986. With these examples it becomes quite obvious that the dream for a fully working exoskeleton or power suit is a long existing one. And inventions like the Titan Arm make it more closer to reality.