SoftPlanet makes it possible for everyone to get free Tweak-7 download directly from our servers. There is no registration needed for downloading.

All the vitamins your Windows 7 OS needs 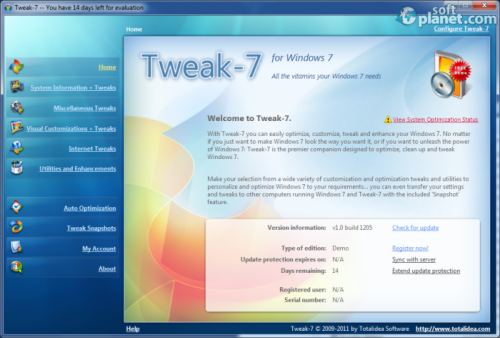 Tweak-7 1.0.1205 is the Windows 7 version of the popular "Tweak" product line, which was started back in 2001 with Tweak-XP. This software established a new standard in system tweaking, probably because of its user-friendly interface equipped with hundreds of system tweaks and system optimization features, etc. The best of all is that you don't need to be some geek in order to work with it.

If we need to be honest, we should spend a whole day in order to just mention all available features of Tweak-7. You can perform all kinds of tweaking. This app enables you to preview your system information, check your CPU usage, memory usage, network traffic, etc. You can also customize your start menu, taskbar and desktop in various aspects. Tweak-7 1.0 provides you with several Internet tweaks as well. In addition, you can also use this software for boost your PC by using some of its enhancement utilities such as System CleanUp, Shortcut Cleaner, Registry CleanUp, Registry Defragmentation, etc. 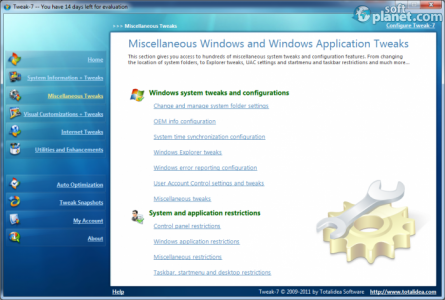 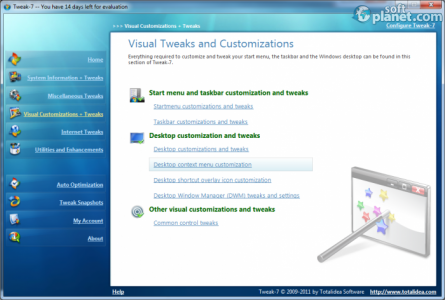 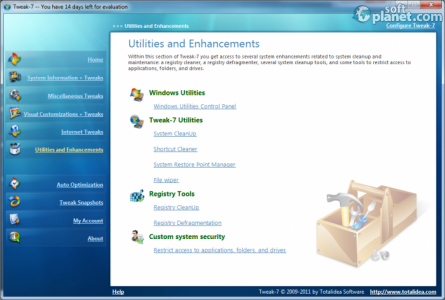 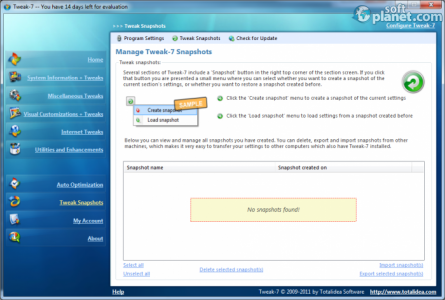 All these handy features are useless if there isn't a proper interface. Thus the designers of Tweak-7 have created a very well-organized layout. Basically, the navigation panel is placed in the left side bar, where you can access most features with a couple of mouse clicks only. In the upper right corner, you will find the Configure Tweak-7 link, which will redirect you to the app settings. One of the options you have there is to change the language. Actually, the GUI is fully globalized in five different languages – German, English, French, Russian and Spanish.

Tweak-7 provides features for all kinds of users. Keep in mind that if you are not experienced enough it is not recommended that you use the system tweaks i.e. registry cleaning ones. However this is where the Tweak Snapshots feature will come handy. It enables you to restore your settings to a certain previous state. Tweak-7 demonstrated very high performance during the entire team test. We couldn't notice a single major bug or issue. Everything seems to work just fine.

Tweak-7 1.0 seems to be the best software solution out there, which can tweak your Windows 7 operating system in multiple aspects. It shines with great usability and an extensive feature list. Please do not hesitate to try it right away and post your feedback within the Comments section.

Our security scan shows that Tweak-7 is clean from viruses. The current version of Tweak-7 has been scanned by our system, which contains 46 different anti-virus algorithms. That ensures that Tweak-7 1.0.1205 is 100% safe for your computer.

Our security scan shows that Tweak-7 is clean from viruses. The current version of Tweak-7 has been scanned by our system, which contains 46 different anti-virus algorithms. That ensures that Tweak-7 1.0.1205 is 100% safe for your computer.