SoftPlanet makes it possible for everyone to get free BS Player download directly from our servers. There is no registration needed for downloading. 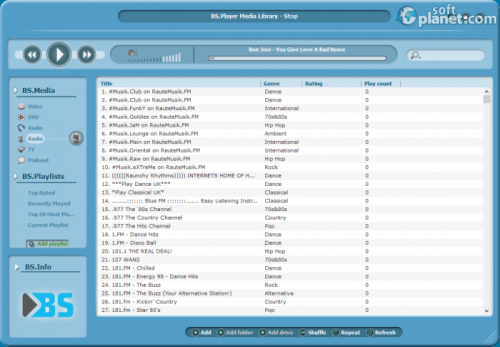 If you do not want to go to a theater and stay at home, BS Player 2.70.1080 can become your personal media player for that moment. It is a universal audio and video player and also can be used for listening to online radio and for watching many live streamed TV channels. Do not worry about this player's compatibility, because it is designed to search and install the missing codecs automatically, if they are not supported by default.

The latest version of BS Player has only minor bug fixes. Except for Windows XP, Vista, 7 and 8 this app is now available for Android. Users can choose between the Free and the Pro version, which is paid. The differences between them are minor, but if you are interested in the features which only the Pro version has, you have to buy it. Both editions support AVI, MPEG, XVID, DivX, OGG, ASF, WMV, WAV, MP3 etc. file formats. Users can create their own playlist just like that, update their media library and adjust all the subtitle settings as they want.

The first thing which BS Player 2.70.1080 will do is determine if your version is not the latest. Then it will show you its user interface which is quite unique. Especially the shape, which can be changed along with the skin. It will take you some time for sure to learn the buttons and the functions. One of the easiest ways to get access to all of them is through the main menu. The populated drop-down list has listed all the features and options you can tweak.

The BS Player Media Library is also very well designed. The left side is preserved for the media list and the playlists. The middle is occupied by the content of the current playlist, which can be supplemented by the Add buttons on the bottom of its screen. Of course the producer thought about all the aspects and has nicely included the main player's controls and the timeline on top of the window.

BS Player operates like most of the programs in this category. The video window is re-sizable, the built-in equalizer can be turned on or off and its presets can be saved. The interface language, the skins and the preferences can be reached from the options menu. BS Player has many different playback modes for the audio and the video files.

Many satisfied BS Player users have already rated it very highly in the website's rankings. This is because this program works flawlessly and offers many useful features. Moreover, if you don't like its skin, you can change it, which not too many media players can do. Anyway, the most important thing about each one of them is to play your media files and BS Player does this always without a strain.

Our security scan shows that BS Player is clean from viruses. The current version of BS Player has been scanned by our system, which contains 46 different anti-virus algorithms. That ensures that BS Player 2.70.1080 is 100% safe for your computer.

Our security scan shows that BS Player is clean from viruses. The current version of BS Player has been scanned by our system, which contains 46 different anti-virus algorithms. That ensures that BS Player 2.70.1080 is 100% safe for your computer.